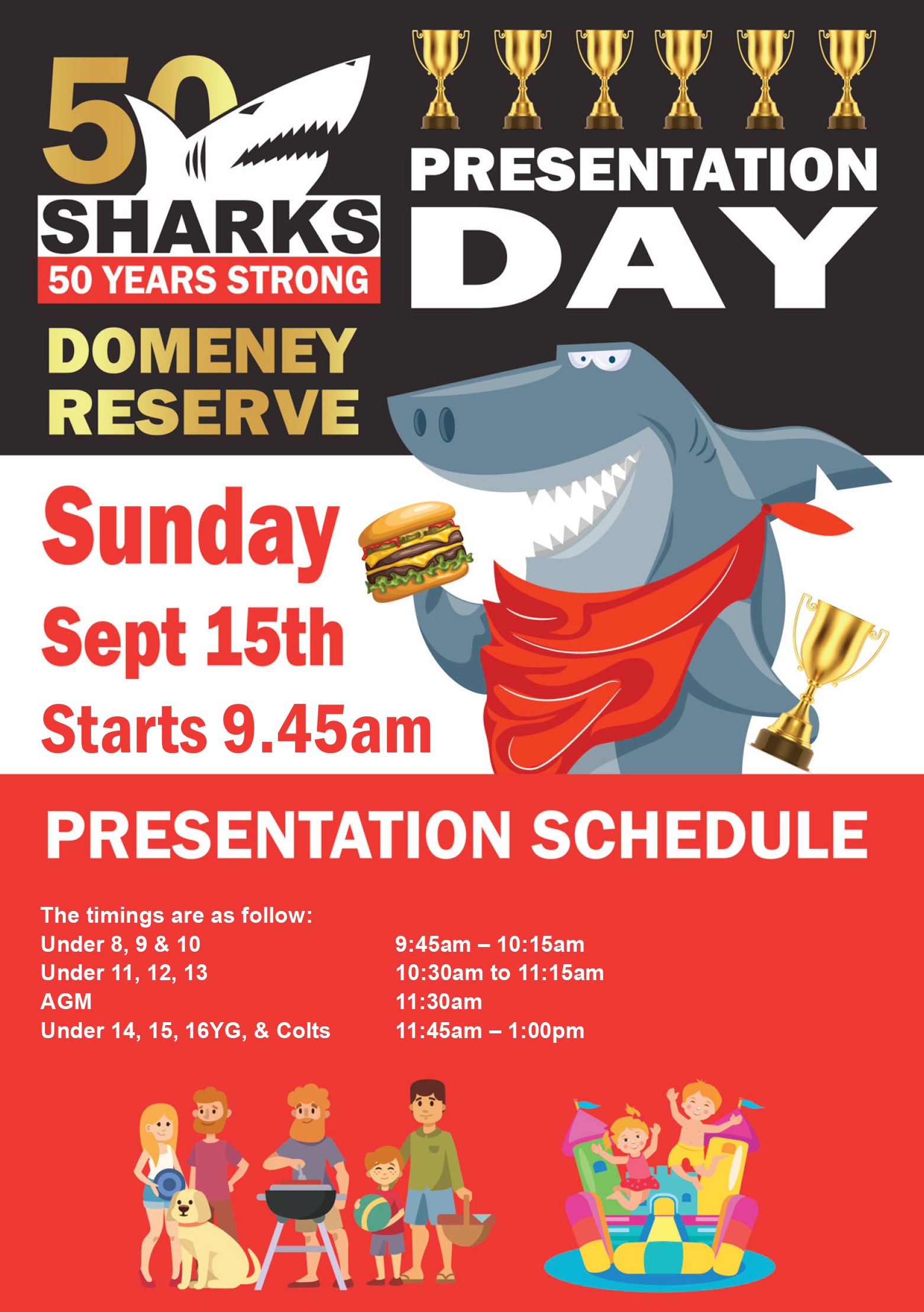 Sunday is about celebrating what you as coaches, parents and committee have put into making 2019 what it has been. Most of all it’s patting our kids on the back and congratulating them on what they’ve achieved this season. Whether that be new friendships, new skills learnt or challenges conquered.

The BBQ will commence at 9.30am
Jumping castles will be out on the oval
Canteen will be open and the BBQ will be cooking ($2 sausage; $3 hamburgers)
Milestone medals will be handed out

We encourage EVERYONE from the club to come down and be a part of the day.
See below the time splits per age group:

Volunteer on the BBQ »

Season 2019, our 50th year celebration as a club, is now officially concluded!

Combined Auskick, Youth Girls and Boys membership was close to 550 attendees. Twenty one teams were fielded with 16 who played for points, 9 teams made finals with 4 teams progressing to a Grand Final appearance. On the day three teams were victorious as Grand Final Premiers. However, I think the hardest part was the after game celebrations and after parties. Oh boy, were emotions and adrenalin running sky high! I couldn’t believe the numbers in attendance back at Domeney afterwards, the combination of players from the junior and senior clubs celebrating the season was extraordinary.

Personally, I was emotionally wrung out after playing every position, kicking/hand passing every ball and running to every intercept during the matches. I feel black and blue from today from all the bumps received. I’m drained and am ready to sleep for a hundred nights to recharge batteries.

There again, so are probably another 150 or 160 proud Parents from today’s Grand Finals. At the mention of the word “Grand Final,” I start to tingle and feel alive again. Thank you to all our Players and Parents of our Grand Finalists for a truly memorable day. You played so well and put everything on the line, hence why we feel we’ve been on a number of roller coasters.

Congratulations to OUR SHARKS Premiership teams of the U15 Red, the U16 Youth Girls, and Colts Red. Commiserations to our U12 girls who played hard but were overrun by their opposition. Personally, a win/win for me. I had two sons toast victory in the U15’s and one Colts for the first time.

However, today I also felt as if I had an additional 42 sons and 38 daughters in total playing. I am so proud of you all in how you played, your passion and your conduct. The U15’s applied pressure and kicked 4 goals in the opening quarter then defended diligently, whilst continually attacking to run out 42 point winners. It helped by kicking a couple of goals in the final quarter and limiting the opposition to no score. The Colts showed their class from the get go and ran out comfortable winners. Every single player contributed and it was a true team effort with a 35 point win. This effort on the scoreboard was built upon quarter by quarter. Enjoy the win and I look forward to seeing most of you next year.

Our U16, Youth Girls, playing their 1st season in Division one was a most pleasing win. Kew had won the flag for the past 3 or 4 years. They are a well drilled team with confidence to match their skills. However, our girls applied themselves to their match plan and played to the best of their ability for a solid if at times scrappy win. By putting two goals on the board early, they threw down the gauntlet to Kew. The pressure was intense, the Coaches handled the day magnificently and encouraged their charges to keep applying force. Eventually, a wonderful result, whereby Kew were kept goalless and a score of 2.7.19 to 0.5.5 saw our girls Grand Final Premiers. You little beauty, well done one and all. All three Premiership teams celebrated with unbridled passion, enthusiasm, plenty of smiles and laughter.

Personally, on behalf of the committee, we would like to thank all the Sharks family who come out to support the teams. Our Community is a tight one and to see so many with Red, Black & White supporting was really encouraging. Also, thanks to all Parents who supported so passionately yet in a controlled manner. Well done and thank you to all participants. Thanks also go to our Seniors Ambassadors and past players and Committee for their attendance as well.

Well done to our Coaches, Team Managers and Parents who played a supporting role. Without your efforts, our kids couldn’t get onto the park each week, well done one and all. I must admit, I have so much to tell all our membership regarding Season 2019. However, I’ll keep it for our Presentation / AGM Report to be released on the 15th September.

The Park Orchards North Ringwood Annual General Meeting will be held at 11:30am on Sunday 15 September 2019 at Domeney Reserve, coinciding with the interval of our Presentation Day.

This meeting will discuss such items as the year’s football and financial performance and it is hoped that we will also identify and vote in any new committee members. Any member wishing to agenda items for discussion must do so 14 days prior to the meeting.

Each member via their child’s membership is eligible to vote and entitled to appoint another member who is eligible to vote as a proxy by notice given to the Secretary no later than 48 hours before the timing of the meeting. Proxy forms are available on request via the Club President or Secretary.

The Sharks will again hold a Presentation Day at Domeney Reserve. As per last season, the day will be split into sessions with the Annual General Meeting occurring at the midway point. Please arrive early for your designated session.

The seniors play this Saturday at Tormore Reserve Boronia at 2:10pm. They play Croydon for a place in the Grand Final along with the U19’s & Reserves who have already qualified. We wish them all the best and encourage the junior club to get along and support them.

If you wish to contact me, please give me a call.

Your shopping cart is empty
Visit the shop